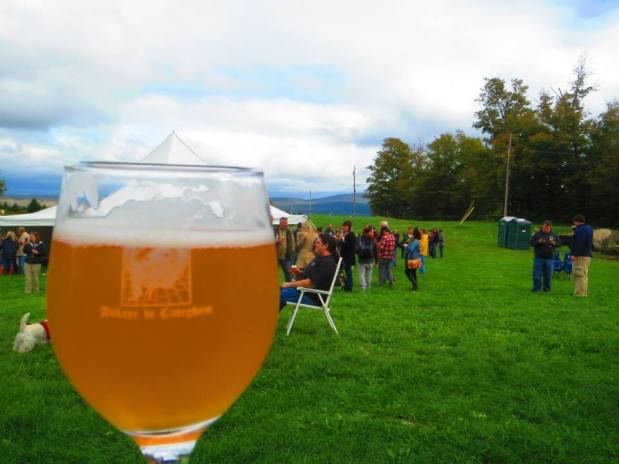 Have you ever heard of Zwanze Day? Every year, beer enthusiasts celebrate the release of a special sour beer made by Cantillon Brewery in Brussels, Belgium. In Flemish, a zwanze is actually a joke, and Zwanze Day is meant to be fun day of drinking this rare beer that is different each year. Cantillon actually hand picks the bars and breweries across the world that they would like to participate in Zwanze day. Then, they send the Zwanze beer over to be tapped at the same time around the world (3 PM EST for us). 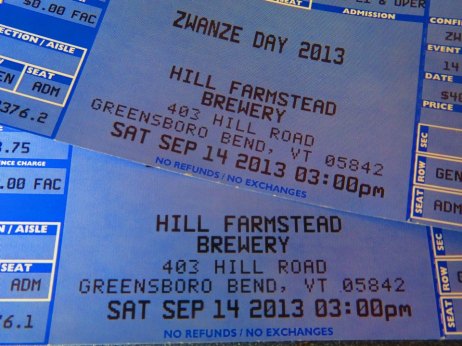 Here in Vermont, we were lucky enough to have a brewery that was picked by Cantillon to participate – Hill Farmstead. Hill Farmstead aka Shaun Hill (the brewmaster) really knows how to throw a party! Only ticket holders were allowed at the brewery for the day, and a tent was set up complete with five different beers: 2 Grassroots beers & 3 Cantillon beers (including Zwanze). They decided to approach the festival in a different manner than usual, handing out colored tickets that corresponded to each beer. Each person received one ticket per beer. This gave each drinker a guarantee that they would be able to try all of the beers so that they didn’t have to worry about waiting in any lines. For once, a beer event wasn’t all about getting a beer and drinking it in line so that you could get your hands on the next beer. Instead, we were able to hang out on Hill Farmstead’s beautiful land, enjoying each and every beer in a civilized manner. Shaun Hill mentioned that he is always trying to think of better ways to organize beer events, and I really thought this way worked well.

After the Zwanze event, we headed over the “Zwanze After Party” at a local restaurant, Parker Pie. This is one of our favorite hang outs in Northeastern Vermont. I’ve actually mentioned it before here. Parker Pie had some great Cantillon bottles and I was hooked on their Kriek as usual!

It’s July 19, just before 11:30 am, and beer enthusiasts from across New England, and beyond, crowd behind a single white string, their empty sample glass in hand. When time changes to 11:30, the white string instantly disappears beneath the crowd, and the beer tasting commences. This is the scene as the Vermont Brewers Festival begins, and although this year began much the same as previous years, 2013 introduced new breweries and beers to the thirsty visitors who were able to get their hands on completely sold-out tickets.

Tickets sold out, to all sessions, for this year’s festival in just 34 hours. The three sessions saw more than 7,000 visitors this year and for good reason. As New England’s oldest and largest beer festival, the Vermont Brewers Festival consistently showcases the best of what Vermont beer has to offer in addition to highlighting Quebec brews. This year, lines began forming early for certain breweries, quickly displaying what breweries had the beers highest in demand. Some Vermont breweries with longer lines included: the Alchemist, Fiddlehead Brewing Company, Hill Farmstead Brewery, Kingdom Brewing, and Lawson’s Finest Liquids. In addition, a number of Quebec breweries saw long lines including Brasserie Dunham, Brasserie Dieu du Ciel, and Micro-brasserie Le Trou du Diable.

I was most surprised by the lines that formed at Fiddlehead Brewing Company and Kingdom Brewing (whose line formed towards the end). These two breweries are lesser known outside of the Vermont community, but showed up with such great beers that became quick favorites. Fiddlehead’s stand out beer that brought forth the crowd was the ‘Hodad Vanilla, Chocolate, Coconut Porter’. It is described by Fiddlehead as “paradise in a glass” and did not disappoint. The coconut notes stuck out with a powerful chocolate porter punch that followed. Kingdom Brewing showed up with ‘Benedict Arnold’, a sour porter that hit all of the right notes in terms of sour and drinkability. It left me smacking my lips for more. Although I noticed quite a buzz about this beer, a later crowd formed for Kingdom’s ‘Addy Pearls Spice Maple Rum Ale’, an ale made with pure Vermont maple sap and stored in Thomas Tew Spiced rum barrels. I was amazed at the maple and rum tastes that hit my taste buds at full force as well as how much I ended up enjoying the combination of those tastes.

The Vermont Brewers Festival continues to deliver a different kind of beer festival in New England. It’s set in a truly idyllic location and features the best of what Vermont has to offer. The festival continues to reveal new and breakout brewers from across the region, in addition to groundbreaking and experimental beers, making it the most exciting beer festival in New England for both the visitors and the brewers.

There is a unique feeling of content you can only get from simple pleasures. As I stand outside of an unfinished barn, with a plastic cup of Society and Solitude #4 (Imperial IPA), surrounded by dirt roads, I have that precise feeling.  It comes from the fact that the dirt road I took to get here had so many horizontal bumps in a row that I could feel the vibrations run through my chest. It also comes from knowing that any wrong turn would have lead to pulling over and asking a stranger for directions because a smart phone can’t save you in Greensboro, Vermont.  Mostly, it comes from knowing that my current buzz is the result of an IPA brewed right behind me.

This is reason #1 why I loved visiting Vermont and why I now love living here. In Vermont, the simplest of pleasures are usually the result of a few small adventures. It is impossible to have an uneventful weekend in Vermont.  The brewery of choice for us this weekend was Hill Farmstead Brewery which is located in the Northeast Kingdom. It is almost impossible not to get lost on your way since not only is there no phone service to call for directions, but you can only also only get there via dirt roads. Even once you pull in, you will still feel lost as the brewery is nothing but a big barn. There is no brewpub or fancy bar but if you are looking for a good, strong IPA, then you’ve come to the right place.

Pup swimming under the bridge.

On our way home, we stopped at a covered bridge that I pass daily on the way to work. I love covered bridges and what they mean to Vermont, so I can’t believe I have never stopped before. This covered bridge, in Wolcott, VT, was the last running railroad covered bridge. I immediately felt the size and strength of the bridge, which although completely made out of wood, would have withstood the power of a locomotive day in and day out. I couldn’t help but feel that simple pleasure again, as I through a stick to Pup in the pristine clear water underneath it.