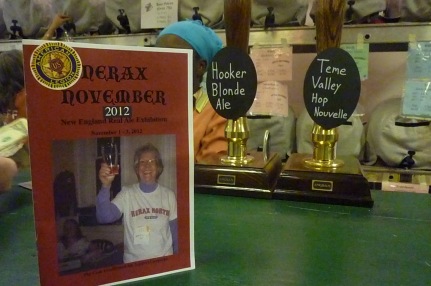 Not everyone has heard of cask beer or real ale. For those of you who have not, real ale is different from your everyday beer because it completes its secondary fermentation in the same container from which it’s served. So, in the case of cask beer, the top fermented beer completes its secondary fermentation in the cask and then is manually pumped out of that cask without the use of any type of gas. What you get is a less carbonated beer, with more flavor and even more texture. Surprising to many, cask beer is served at a cellar temperature of 55 degrees.

One of the many reasons I enjoy living in New England is because of the diverse options that exist when it comes to beer. Each state has its own thing going when it comes to beer and, as a beer lover in New England, you can never go bored. This weekend, the New England Real Ale Exhibition held their  16th cask festival. So, on Saturday morning, Anth, Pup, and I made our way down to Somerville, MA to check out what a 100 cask beers on tap in one room looks, smells, and tastes like. 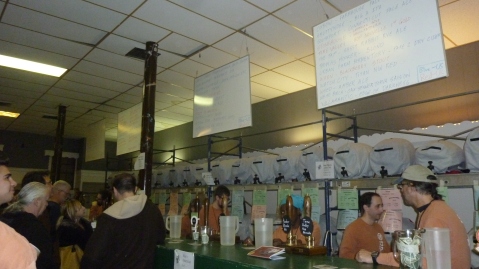 The cask conditioned ales waiting to be tapped

Somerville is located right outside of Boston and is about four hours from our home in Elmore, Vermont. Four hours is an easy weekend drive for us, so we left Saturday morning, meeting for lunch with our friend at the Yard House, before heading to the festival’s night session. What struck me most about this festival in particular was how organized and relaxed it was. Many beer festivals can be quite chaotic, with large lines and loud music. The NERAX cask festival was much more about enjoying cask beer with other cask-minded individuals. I was also impressed with how they chose their tap list. They had two categories of beer: beer from the U.S. and beer from the U.K.. However, the beer from the U.S. was all from New England! Yes, all 50 U.S. beers hailed from the six most Northeastern States.

My favorite cask conditioned drink was actually not a beer at all, but a fermented cider. It was called the Take Two Dry Cidah and hailed from Portland, Maine. The cider actually takes reactivated cider yeast, and instead of adding carbonation to feed the yeast, they add raw Maine wildflower honey and then cask condition it. The company behind this madness is the Urban Farm Fermentory. They are doing a lot of cool stuff in and out of the cider world including fermented vegetables.

The NERAX Cask Ale Festival lived up to its expectations and offered something different in the New England beer scene. I think we will definitely be heading back for future sessions. On our way home Sunday, we made a detour in Gloucestor, MA, one of my favorite coastal New England towns, to visit the beach and local brewery. It was the perfect ending to the weekend, but that’s an entirely different post!